I have never been a fan of detective stories, except for those of Conan Doyle, but I recently became acquainted with the film series Agatha's Christie's Poirot. These 65 episodes (with five more to come) are excellent. David Suchet is Hercule Poirot. I highly recommend them.

Watching these fine productions led me to read some of Agatha Christie's stories. I will not be reading them all, but it was good to see how the author depicted her characters.
My fascination with the immortal Belgian detective led me to write my first piece of fan fiction: a  light-hearted detective story gently satirizing Hercule Poirot and his world.

I here present you with the opening of the story. If you would like to read it all--at 17 pages it's too long to post on a blog--you may find it at  https://www.fanfiction.net/s/9321353/1/The-Adventure-of-the-Surprising-Ending

I would welcome comments on The Adventure of the Surprising Ending. 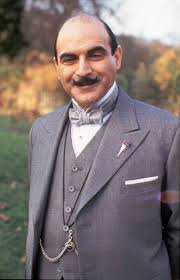 THE ADVENTURE OF THE SURPRISING ENDING
On a bright, sunny morning in central London—very odd weather that many found disconcerting—the greatest detective in the world sat behind his large desk sipping his customary cup of tisane while perusing the Times.
The clock on the wall said 10:13:27 AM, Friday, May 28, 1937 A.D. (The detective, impatient with slipshod clocks that provide only partial information, had had this one custom made in Zurich.) He closed the paper, thinking that today’s lead article offered hope for the future: now that Mr. Chamberlain had become Prime Minister, maybe England would at last begin to take a firm line against Herr Hitler and Signor Mussolini. It was high time.

The door to the outer office opened as there entered a tall, lean, handsome gentleman of perhaps fifty years, attired in a neat grey suit and a regimental tie. This man by his very presence radiated all that was fine in the British upper-middle class: honesty, plain dealing, bravery, trustworthiness, dependability.

“Cheerioh, old bean! I say, what a simply spiffing morning, what?” he called out as he tripped on his own feet and went sprawling on his face. Fortunately the inch-thick pile of the fine mauve carpet prevented any injury.

The great detective contemplated this through his pince-nez and said, “Eh bien, mon pauvre Captain Waterloo, vous êtes bien maladroit comme usuel, n’est-ce pas? Please, arise and adjust your garments. Your cravat she has been much disorganized.”

The former officer was spared further contumely by the rapid entry of a lady in early middle age, her dark blonde hair tied in a severe bun, her not unattractive figure mostly concealed by her modest blue dress. She proffered a handful of mail. “The first delivery, Mr. Greycelles,” she said. “And there was a very urgent call from Viscount DeLuxe. He seemed to think he could speak to you at once, but I explained that you never accepted calls before 10:18½, after you finished your tisane. I told him you would return his call.”

“Quite right, my dear Miss Kumquat,” said her employer. “One must have order and method in one’s life or it becomes like the existence of the wild beasts of the field. Did his Grace hint at whatever petit problem troubles him?”

“He said that an explosion has destroyed the entire staff wing of Garrish Manor, his ancestral home, killing eleven retainers, including Mat Grubb, his Chief Gardener for forty years.”

“Ah, these trifles,” said Greycelles. “Call his Grace and ask if his senior under-gardener survived. If, as I suspect, he was not even there—probablement he said he had to make a sudden visit to a sick great-aunt or other superannuated relative—then voilà! Gardeners know all about fertilizer, a prominent component of which, the nitrate of aluminum, is most useful in the making of the objets explosif such as the bombs of time. As for motive, the man surely wished to supplant his senior, whose long tenure of office must have annoyed him.”

As the efficient secretary hurried to make the call, Capt. Waterloo, now seated on a sofa, exclaimed, “By Jove, Greycelles, aren’t you jumping to conclusions? I mean…”

The soigné detective raised a plump hand. “Doucement, mon vieux. Énée Greycelles, he leaps not to the conclusions rash. Did I not just read in the Times that a hundred pounds of fertilizer was stolen last week from a warehouse in Little Rotting, a village not far from Garrish Manor? Eh bien, the under-gardener took it for the construction of the bombe gigantesque used in the up-blowing of his so-hated rival the chief gardener. So now we have solved two cases. Remind Miss Kumquat to bill both Viscount DeLuxe and the Little Rotting constabulary. But now let us peruse the mail and discover if any real problems await us, mon ami.”

The mail apparently contained nothing unusual. The bill from the cleaners for £150—the detective always had a suit cleaned after wearing it once—and the confirmation that four pallets of the finest tisane were en route from Brussels, were routine, as were the advertisements from three manufacturers of moustache wax and eight clothing stores. But upon reaching the last item Greycelles exclaimed, “Tiens! Voyez, Waterloo, a coronet on this so-expensive envelope.” Hastily he ran his Damascus-steel letter opener under the edge and withdrew a magnificent sheet of paper. “Mon cher ami, we are bidden to see the Duke of Worcestershire at Daggerthrust House, his summer residence in Kent. His Grace recalls fondly how I found his missing cuff link two years ago and now has another matter about which he wishes to consult us.”

“A bit of all right, that,” said the captain. “I can run us down in my new Bugatti 57T. I’ve installed patent feeder gaskets on the supercharger and chromed the reverse valve injectors so the gidgit pump maximizes the superflow. Goes like smoke, old chap.”

The detective peered over his pince-nez. “I have no idea what you just said, but from your animation I infer that you can provide adequate transport to St. Anspeth-on-Sea-by-Marsh, the village where Daggerthrust House has its location. Excellent. We leave in three days. I shall have just time enough to groom my moustache.”

Before Greycelles and Waterloo left for lunch, Miss Kumquat reported that Viscount DeLuxe’s senior sub-gardener had been arrested and had confessed to both the bombing and the theft of the fertilizer. “His Lordship sends his undying thanks for your miraculous insight,” she said. “And the Little Rotting police are eternally grateful, especially since they had grown very tired of interrogating every tramp they could find.”

“Mais naturellment,” replied her chief. “But fail not to send the bills promptly.”