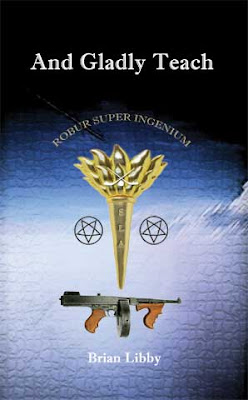 Most of the information here at Write Away is about the Mercenaries trilogy (and if you have come here to investigate those excellent works, please scroll down a bit; you will find copious material). Just now I’d like to say a bit about two other books.

AND GLADLY TEACH, published in 2001, is a short novel (174 pp., 12-pt. type) about life at a fictitious boarding school. It is droll, risible, piquant, or, in a word, funny. It is satirical—sometimes acidulous, even mordant. It is not mainly about students, rather the faculty and administration; most events are seen through the eyes of Mr. Jones, a history teacher. It has sold about 250 copies and many readers have enjoyed it a lot, if I do say so myself. Why not find out for yourself? (There is an excerpt here; go to the entry of February 1, 2010.)

THE UNITED STATES CONSTABULARY, 1946-1952 (190 pp.) comprises my doctoral dissertation and three papers I wrote in grad school. I exhumed these and retyped them (making a good many syntactical changes—I write better now than I did thirty-five years ago) so as to make some tiny contribution to my profession. They are, of course, very serious (although the dissertation is probably the only scholarly treatise with a smiley-face in the notes—inserted when I retyped it, as my dissertation committee would not have approved).

The United States Constabulary was a force formed from several armored cavalry regiments to police the U.S. Zone in occupied Germany. It spent most of its time trying to suppress the black market and handling problems created by the presence, among the ruins of southern Germany, of tens of thousands of DPs (displaced persons, mostly Poles and Polish Jews).

The three papers are (1) The Blockade of Brest, 1803-1805, a study of the most important military operation in history in which nothing happened, (2) The Struggle For The North: Latvia In 1919, about the role of German mercenaries in securing the independence of that Baltic country in the aftermath of World War I, and (3) German Intelligence On The Eastern Front: An Assessment, which is an assessment of German military intelligence on the Eastern front in three major operations (Stalingrad, Operation Citadel, and the Russian June offensive of 1944).

If any of these items pique your interest, you may obtain them from me, or from Amazon.com, or from the publishers (AuthorHouse for A.G.T., Lulu for the other two).