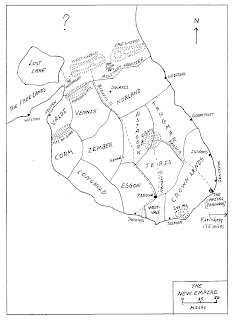 The main political unit of the west, the New Empire has a polity somewhat reminiscent of the Holy Roman Empire. The Emperor ruless the Crown Lands directly; the nine provinces are subject to their own sovereigns, who owe fealty, but not taxes, to the Emperor. Valdi, which broke away from the New Empire long ago, is entirely independent.
Andiriel was raised at the Institute for the Salvation of the Homeless in Javakis, Norland.
(Click on maps to enlarge them)
Posted by Brian at 2:18 PM